Our owners, Wayne and Tom Gardner, were introduced to the cranberry industry by transporting cranberries for local growers and processors. With the inception of Gardner Cranberry in the early 1990’s they started growing their own cranberries with two 1.5 acre bogs. Presently we harvest and process over 1,400 acres of their own bogs.

In 2005 they entered the cranberry processing arena with completion of their 78,750 square foot cranberry juice processing facility. Badger State Fruit Processing has annual production of over 2 million gallons of cranberry juice concentrate and 5 million gallons of single strength juice. Gardner added Premium Dried Cranberries to their product portfolio in 2013 with the completion of their state of the art sweetened dried cranberry facility.

The annual production of the plant is 25 million pounds of finished product with further expansion to be completed in 2016.

Wisconsin produces nearly 60% of the cranberries grown in the United States. 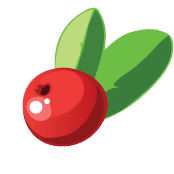